50 plus very interested Lake Worthians gathered at the Annex to attend the Lake Worth Historical Society presentation by Marion Cone, who did most of the research presented.

Marion took everyone down memory lane as she recounted how this town came into being via a lottery system set up by The Palm Beach Farm Co.  aggressive advertisement for $20 down $10 a month you could own a 25 x 135 lot in town, if you purchased farmland plots just west of Lake Worth.  “Live like the millionaires on Palm Beach”.  plus you could earn a living via being a tuck farmer or tending an orange grove.

. Plaques were handed out to the owners of the 1912 homes  that still had identifiable original  architectural details.  Out of 30 possible candidates 5 were given that honor.

The earliest settlers had been documented  in a very interesting book by Ted Brownstein ” Pioneers of Jewell” This presentation however, starts with the 1912 Census as recorded in the Lake Worth Herald.

Those awarded last night still have parts of the original structure in their homes.  Overheard one of the awardees house still had about 12 florors on top of the foundation.  One of the oldest houses at 109 s Federal was a rooming house. (todays terminology perhaps an air B and B  lol)

Also recognized for doing so much was Walter Harper who has tirelessly been working along Marion Cone.  They penned a book together on LW Cottages.  and many of the improvements as signage and presentation of artifacts was due to his diligence.

This on the heals as a developer bullozess Frank Lloyd Wright building  during the night, as preservationists rush to save it.  Building was on the National Register of Historic Homes.

Morning starts before 6 a.m. for many of Lake Worth Volunteers, they have done this year many years now, in our community.  They are charged with the preparing and serving of the breakfast for 7:30 held at the  St. Andrews Church on s 10 and E st.. The  Interfaith service is attended by area leaders of different denomination with the goal,  of peace and unity.

a four-mile route through downtown Atlanta” I with with thousands walked the entire route following behind.” eye witness, Fred W. Hunt

The  day is spent in recognizing what brought us to this point , 50 years later and in service to others. As a volunteer one is in the background and does not see the dedications or the performances that take place honoring Martin Luther King.

hand in hand “For the Children”

As a volunteer your in the background and do not see the dedications or the performances that take place honoring Martin Luther King. A program with song and prayers in all denominations  and reflections of where we are, our hopes for the future.  Our own troubadours Mel and Vinnie performed as did  others including kids from For the Children 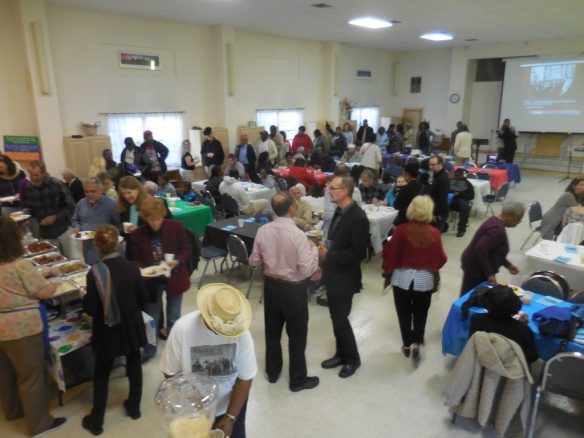 The day then begins after everyone disperses and I found myself downtown and spoted these children in front of one of our new murals.  Quite a large statement for unity “Build a Bridge” A statement that embraces us in Lake Worth  50 years after Martin Luther Kings death.  Perfect!

The volunteers with little rest,  back on track no later than 4 p.m. at the other St. Andrews, this time it’s the Episcopal church on Lucerne and Palm Way corner.

It’s the same crew that served and prepared breakfast. 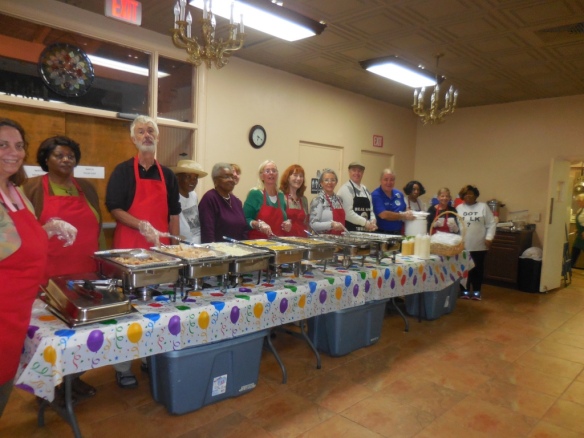 same as morning crew with a few  more volunteers.

This time the preparations began around 4 p.m. while the march is being organized from City Hall to the MLK memorial globe on our Cultural Plaza. Again some like Commissioner Maxwell appears to be everywhere, as he was, at breakfast serving, at the Cultural Plaza dedication, and again serving. 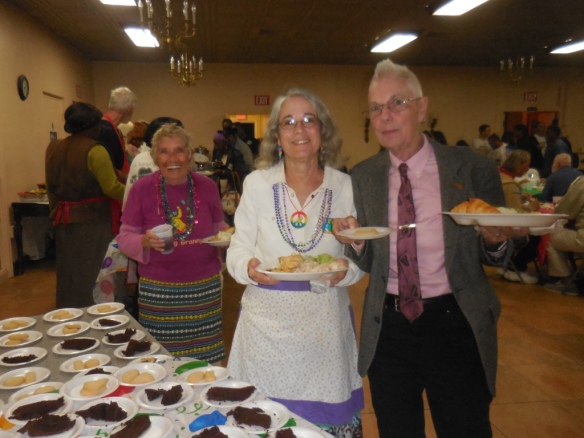 some of the raging grannies who have led protests for oh so many years.

There were two seatings and myself had counted the plates for the deserts and last count was 275.  We were treated to a short performance,  beautifully choreographed and the words of  Martin Luther King and Maya Angelou interpreted in dance by these  talented young women.

if you know any of the dancers or people in these photos please share.

The following photos are shared from participants in the march from Lake Worth City Hall to Cultural Plaza .

note the camera,  I was behind the scene     photo by Maryellen Healy 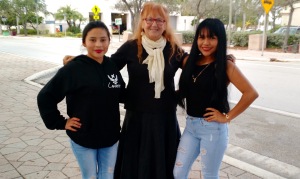 my newest neighbors, asked me for a lift to get downtown for the candle light march.

Activities are stacking up here in our quirky paradise.  Bonfire  cancelled,  saw an influx of people enjoying the free galleries receptions  last night.  The opening of our newest artist space is now on 16 s J street.  That area is becoming quite a hub of activities.  The Bohemian Coffee house known as Common Ground, the recently opened Book Cellar just across the way and now the Art Studio Cafe had it’s GRAND OPENING. 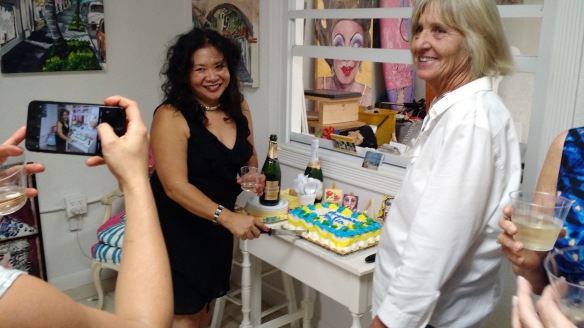 Mary Lindsey gave the blessing to the new establishment and a poet read his poem of  Janus the roman God of new beginnings. 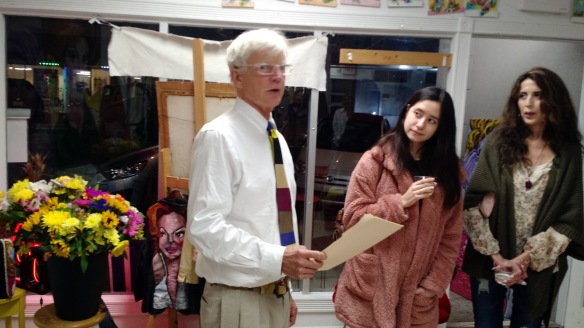 The Champagne toast made it official. 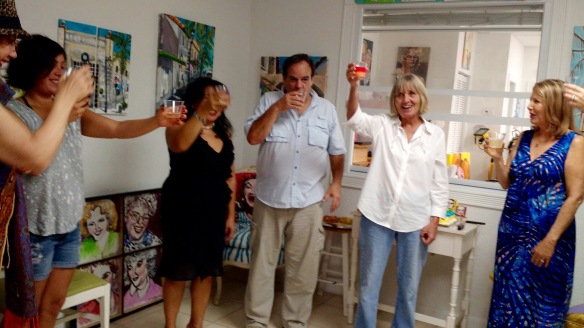 On to the next art space the Cultural Council  had two exhibitions and the crowd flowed into the street.

One show is extreme modern abstract came with it’s own band and then the gem of a small show well named for it’s rare beauty RUBY as were the works of art, detail oriented.  You might want to spend time enjoying  the quality of these exquisite small works.  A saying of mine “big does not make it better“.    A quick hello to LWAL and the new exhibit with special guest artist Diane Hutchinson and ribbons for 1st 2nd and 3rd in this juried show. 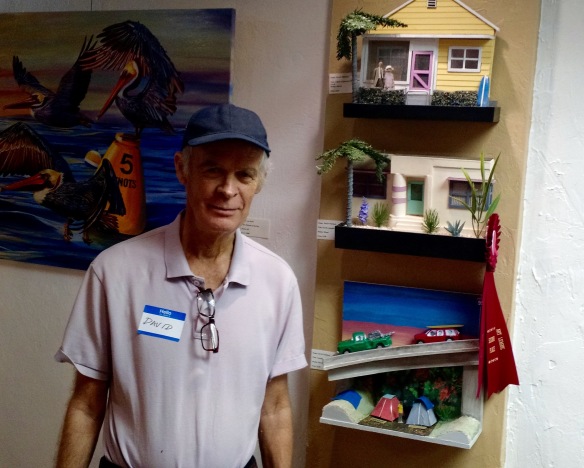 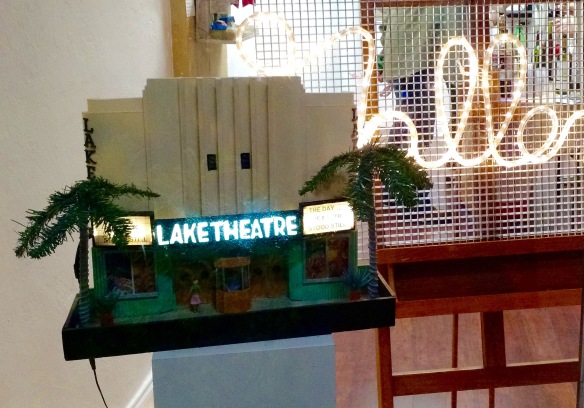 This was the Cultural Council bldg. once upon a time,  with  lit up marquee.

Then back around to Artisan on the Ave.  did not have a reception but is always busy.

December was a knock out month according to Director Betty,  they made $9,000 in sales, best year yet.  So happy for all the artists represented there.  Back to the Common Ground Coffee where I inadvertently left my IPad to charge.  The duo singing were performing to a full house.  All this on a Friday night in Lake Worth Florida.

MUST SEE  !  Tonight OPENING  about 20 minutes from downtown Lake Worth is the Box Gallery  811 Belvedere. The reception for  Artist Martzia and her oil and gold leaf, 12 foot frieze.   It is a academic work of Homer’s Ulysses.  Plays into the Art Palm Beach schedule.  Roland has a prize that is worthy of a large institution.

This blog was started Jan. 2015  and has over 1,600 posts.  all about Lake Worth, covers cultural happenings from Central Fl. to Key West.  I run a feature on the Artists periodically who live in 33460.  I try to be informative and I thank you all for reading, following plus commenting. NEW a dated chronological events listing bellow and where possible links to them.   This is not a political blog 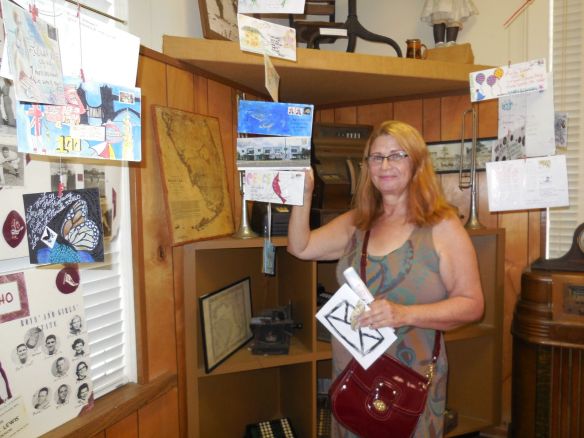 in the Historic Museum 100 mail art pieces from around the world for our Centennial celebration.

For the 1st post  the New Year I embrace some of  Lake Worths history.  As you see this is our Lake Worth Ladies Kitchen band.  Where did this come from, you ask.  Well on the wall as you enter the annex from Lucerne Ave. look to your left.  This is the band from 1912

Lake Worth Ladies Kitchen Band circa 1912

the LW Ladies Kitchen band circa 2018

From here on in, the Lake Worth Historical Museum will open the 1st Saturday of the month and there is a grand opening scheduled.  and below if you did not realize the City of Lake Worth has the Hibiscus flower as it’s emblem, the original banner, was still hanging in City Hall last time I looked.  This version was done by Walter Harper who has

been a driving force to get the annex open and our rich Lake Worth  history available to visitors and residents with viewing hours.  He also was behind getting some of the old photos enlarged and displayed. See them on the lower level where we pay our utility bills and where the information desk is located. Museum is upstairs and maintained by Mrs. Green who has worked tirelessly along side Glenn Scheiner who is converting the info to digital format. Contact Walter Harper  seen below, if you want to volunteer on

Throw back memories saved from the deletion of 35,000 photos.  But as I culled the masses of unused photos, some not appropriate for specific articles or used in other areas like the one of the group sitting in the former Neighborhood tent that was also the intro photo for the Lake Worth Anthem.  Might as well sing it while you look at these photos. 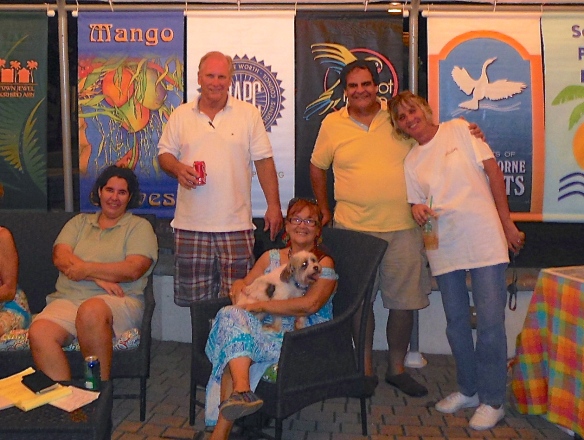 Then there were photo opportunities,  just like this one with Mayor Pam . 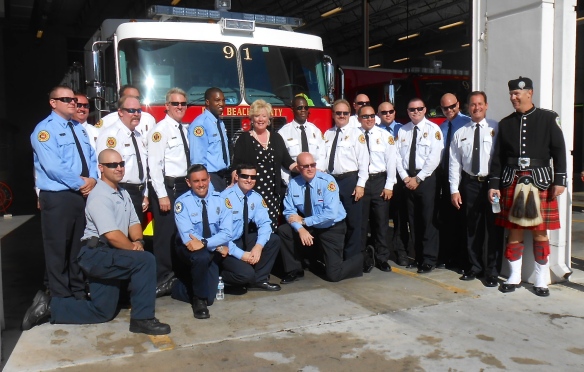 This was when the mermaid made an appearance at the baby pool.  yes there was one . once upon a time.

then we all were agast when they moved. 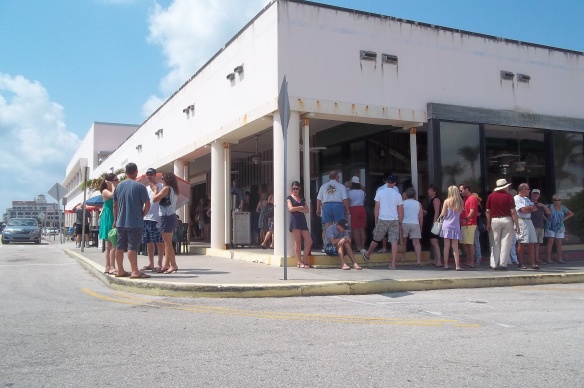 Those of you who love Benny’s at the beach also loved Benny’s before, Do you remember what it looked like before. 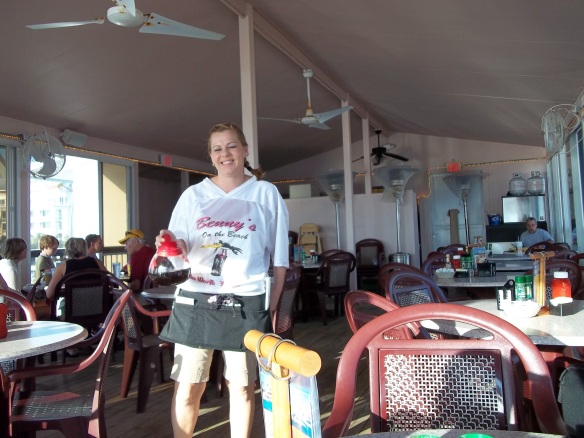 Good memories from a Pride Festival, all still good friends. One line from the song applies to our  friends here.

this is a hard won trophy and the keeper gets to keep it a whole year.  Very sought after.   Well it had belonged to Bryant Park but new neighborhood Mango Grove took it home. 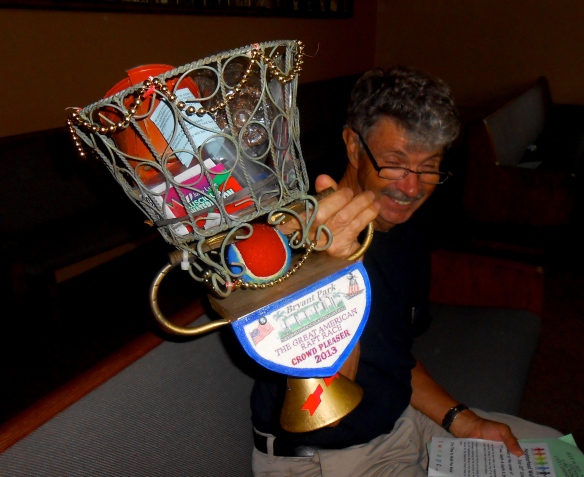 now for another wonderful event out at the beach.

trying to be fair, as now Ladies nights are being sued for discrimination over in London.  Do alert your friends of you see them here.

this makes it eleven as today is January 11th  This below was opening night of the new hot shop or we call it Benzeiten.  Vee Callero of Ft. Lauderdale and myself with my art collection.

To write is human, to get mail, Divine!

People Places and happenings that makes Lake Worth outstanding every day.