As I drove up, to our Lake Worth Beach it’s as busy as always, so what was that thing I heard about the beach closing.   I could see the waves way out crashing from the car. Rarely see people sunning themselves on the grass.  No alarms went off.  Made for some nice photography.   Then I wondered why are all these people lined up looking out to sea.

BEACH CLOSED!  This was most likely the busiest day for our lifeguards as they had to be extra vigilant, people do not like being restricted and curiosity gets in the way.  Spotted a few surfers in the water, they were junior lifeguards.  The sand had encroached on to the boardwalk. That indicated the high tide line.  Heard that one surfer drifted, ended up in Lantana as the ocean current was carrying him south with major force. As one person described it “a heavy river going south? she was speaking of watching the current. 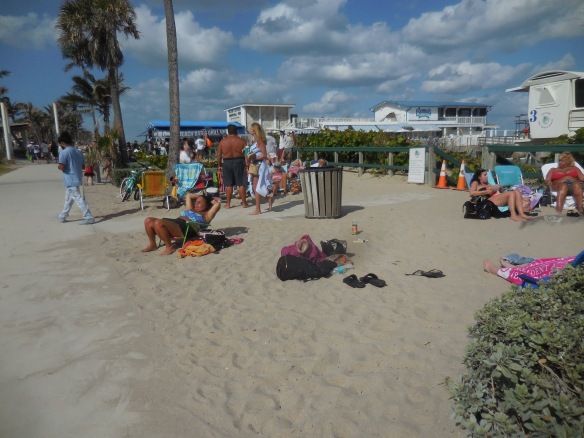 recognize the promenade, that is where the water came to at high tide

no surfers except  Jr. Lifeguards

It did not impact the businesses however there are several meters not functioning.  On the north side ones been out for better than 10 days tourist let me know. LOL I told him I would report it to the right person. On the south, one refuses to take coins well that’s true of the north also. I only take quarters since with my fair skin  45 min will do me in.   Had to wait in line for a guy in front of me dealing with quarters that kept coming back and coming back.  I didn’t have any better luck either so by the time I got back to my car,  ticket!