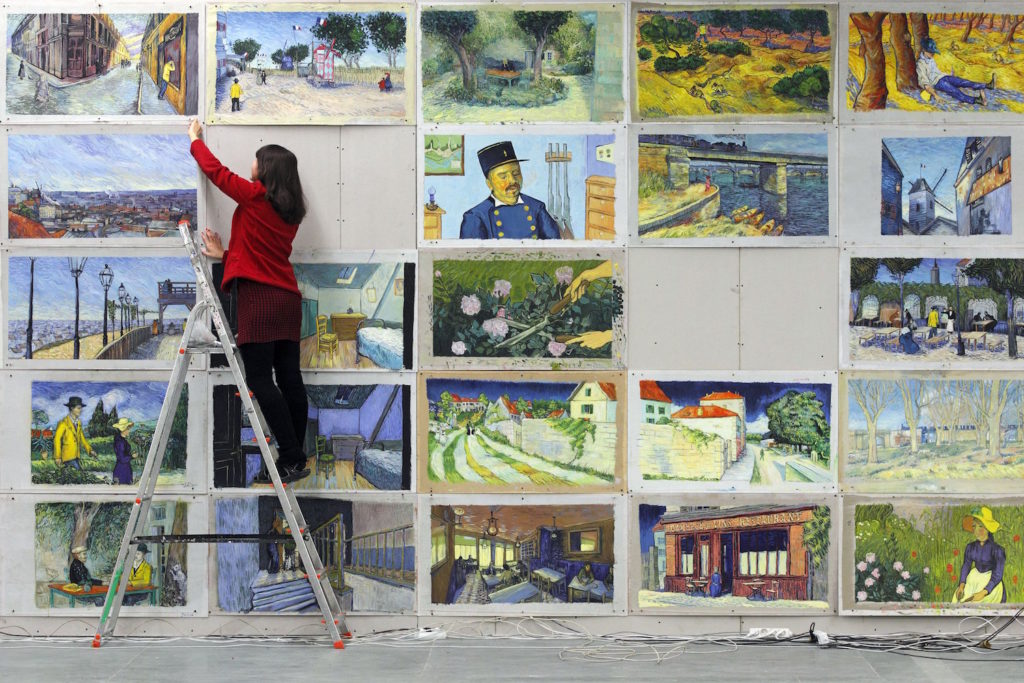 Joanna Maleszyk hangs up recreations of Vincent van Gogh paintings at a film studio in the northern Polish city of Gdansk on December 5, 2014. She is one of dozens of Polish artists working on “Loving Vincent”, the world’s first painting-based animated feature film. (PIOTR WITTMAN/AFP/Getty Images)

It was at our Stonzek theatre twice and those artists in the know did indeed ban together and made it an outing.  Thank You Stonzek for giving us the friendly price.  Here is the story of how it was put together.  Still fascinating, and would not mind seeing it once more. 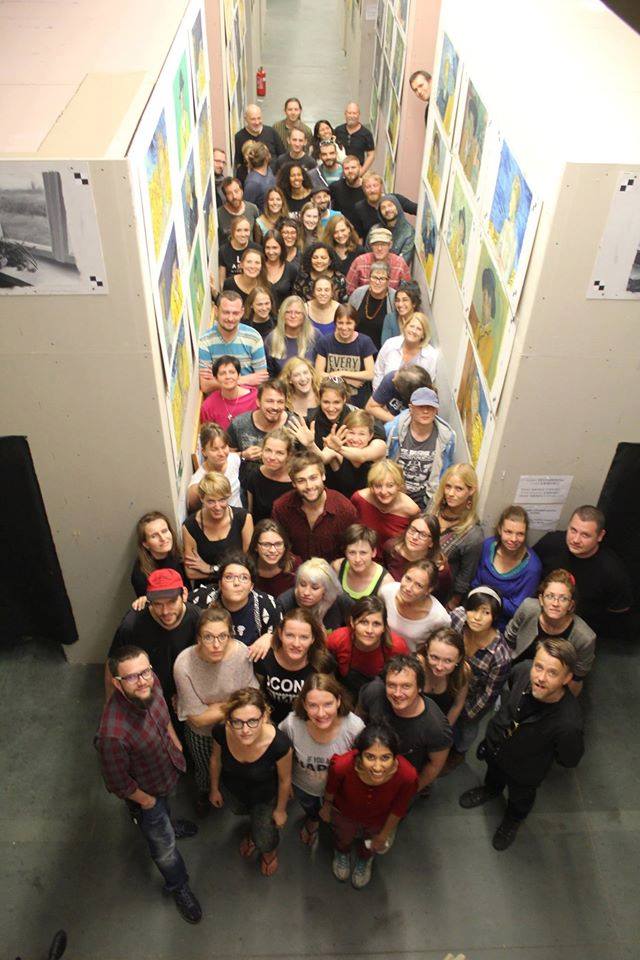 LovingVincent.com. Taking six years and an estimated $5 million to create, 125 artists painted more than 65,000 frames in oil — all in van Gogh’s signature style, of course.

“It was the most amazing experience,” recalls Sarah Wimperis, one of the artists who worked on the movie. “Like a boot camp for artists, at times it was brutal, very tough getting through the training. [There were] long hours, and [it was] very difficult to shed your own artistic style. Everyone was far from home and families. But it was also brilliant [and] a fantastic project to be involved in.” 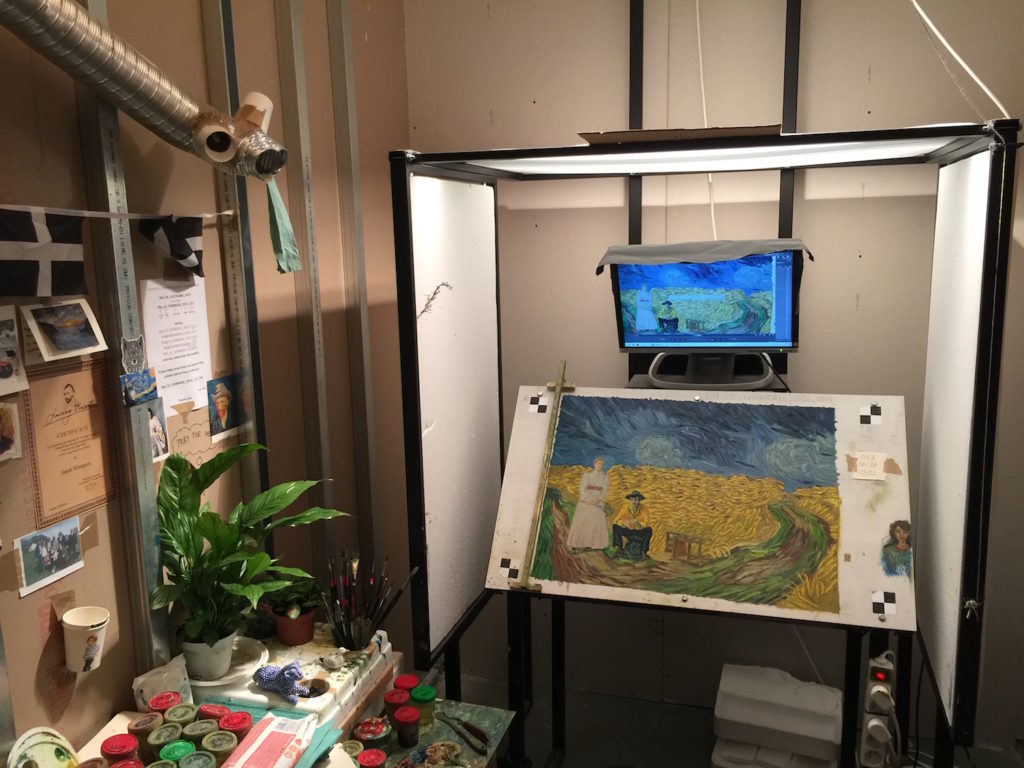 The troupe of artists worked out of studios in Gdansk and Wroclaw, Poland, and another in Athens, Greece, for the duration of the project. They were assigned to small lightproof cubicles called lighting PAWS (Painting, Animation Work Stations) lit with halogen lamps to ensure consistent lighting when snapping pictures of the finished frames.

The actors were filmed on a green screen with minimal props, explains Wimperis, and transformed into a sort of line drawing. Frame by frame, a shot would project onto an artist’s board to act as a guide to capture the actor’s movement.

“The picture would then be created combining the van Gogh painting (that was the ‘set’ for the action of your shot) with the actors,” notes Wimperis. “The actors had to be painted in the van Gogh style but still [maintain] their own looks, like a portrait.”

This presented a challenging task for the artists. “You would get the first frame painted, find and mix all the colors by eye, mixing enough color to last for the whole shot, some as long as 300 frames,” continues Wimperis, adding that the process could take anywhere from one to five days, depending on the shot’s complexity. 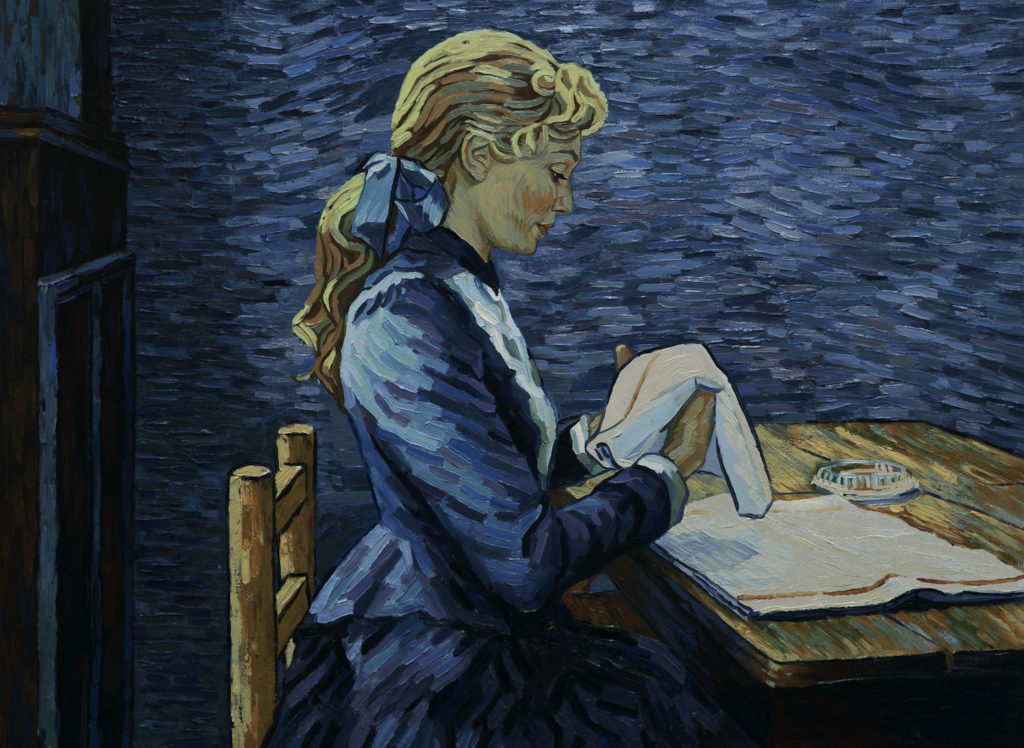 Once the frame in the shot received the “all clear,” the animation could begin — which, the artist notes, meant scraping off the painting, cleaning it back up and replacing the brushstrokes one by one in a slightly different position. Then, the cycle repeats by moving on to photograph the second frame. Following this process, Wimperis averaged about four frames per day.

With such an extensive method to complete just one frame, Wimperis says the number of frames she worked on for Loving Vincent is etched on her heart. “I painted 384 frames for the film over a period of five months,” she exclaims. “At 12 frames per second, I painted a grand total of 32 seconds of the film!”

To some, 32 seconds of a roughly 94-minute film may not seem like a worthwhile feat after tirelessly working for five months far away from friends and family. However, to Wimperis, working on a project involving one of the most famous artists in history was a once-in-a-lifetime opportunity.

“[Van Gogh] is one of my favorite artists; he always has been,” shares Wimperis. “But I love him more now because I feel that I have a special connection after spending so long in the company of his brushstrokes.” 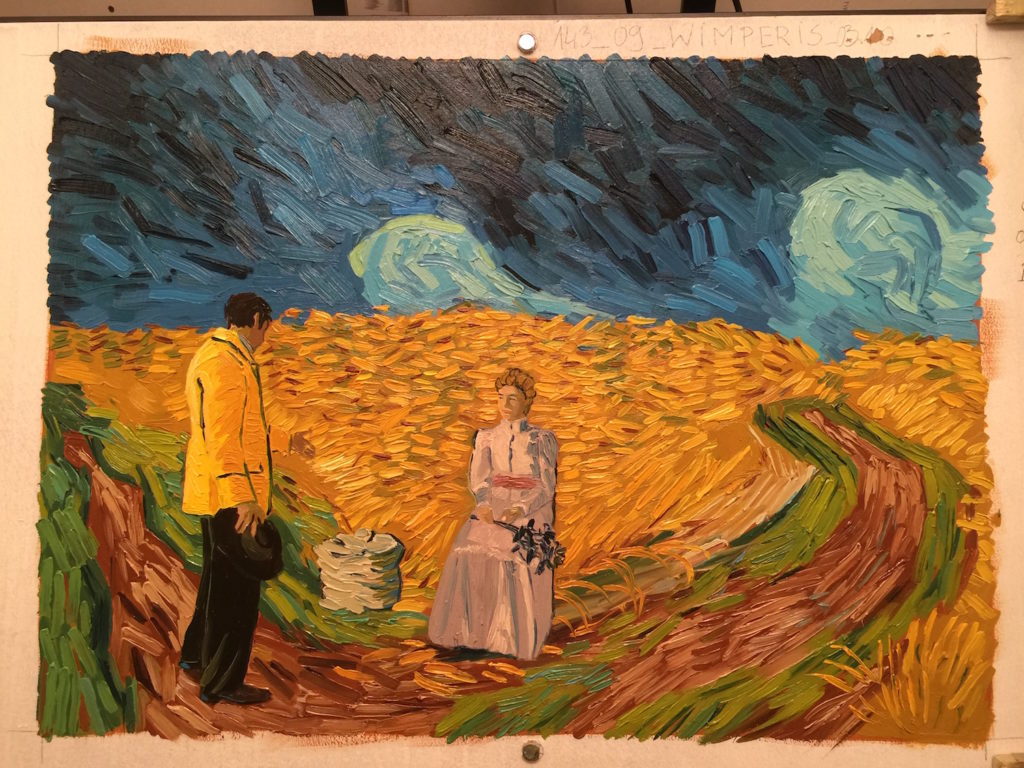 One of Sarah Wimperis’ shots for Loving Vincent 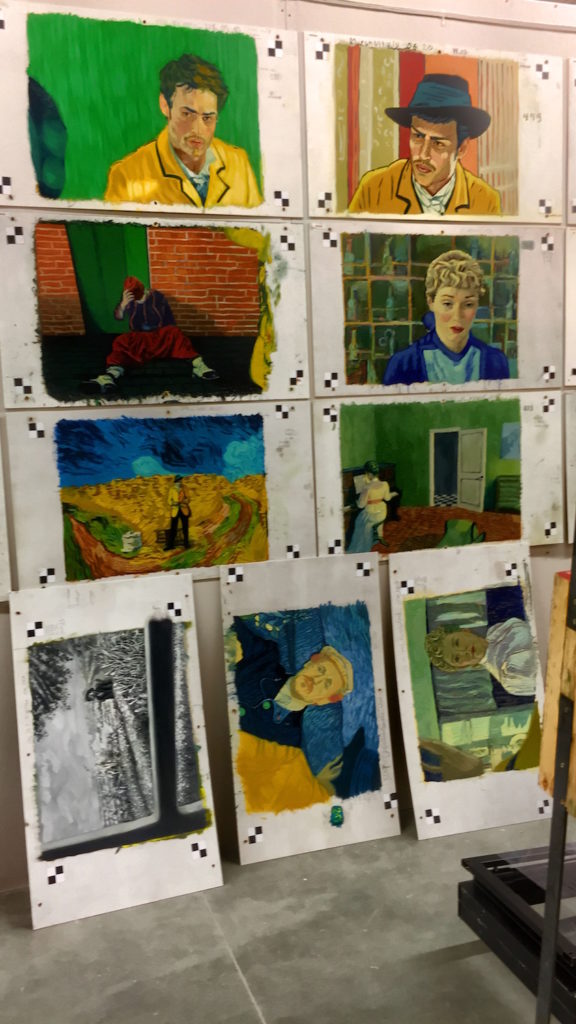 Finished frames in the studio; photo courtesy of Sarah Wimperis

In addition to copying the brushstrokes of a master artist, attending the premier is another epic perk of the job. Wimperis — along with other artists who worked on the film — was able to attend the U.K. premiere of Loving Vincent held at the National Gallery in London.

“I was also on the Q&A panel after the film, so I missed the ending [since] I had to be backstage,” she recalls. “However, I have seen it quite a few times now. It’s so lovely to see it finished. And the music is wonderful. I am just very proud to be a part of such a great project.”

So how does one get selected to take part in such a prestigious project? “I saw the recruitment trailer on Facebook. It went viral with over 200 million views,” says Wimperis. “They were asking for interest from artists who painted in oil color so I sent them samples of my work, as did 5,000 other artists from all around the world.”

After not hearing anything back, Wimperis nearly forgot all about the opportunity. But, several months later, she received an email from the movie’s production team requesting a Skype conversation. During the chat, she was asked if she would be interested in coming out to Gdansk for a three-day testing period.

“Of course I was,” she asserts. “A couple of days later I was on a flight to Gdansk. They tested about 90 artists from everywhere: U.S., Canada, Mexico, Australia — all over the world. It was [a] hard three days of learning the very basics of animation with oil paint. Then we all went home with no idea of how we had done.”

About a week later, 30 artists including Wimperis were invited back to Gdansk for a three-week training session. “I was doing an art fair with my assistant when I got the call. So we packed up our stand, drove to a supermarket and I [bought] a suitcase to put my weekend’s worth of art fair clothes in,” remembers Wimperis.

Her assistant dropped her off at the airport. They said their goodbyes for what they thought was a three-week trip to Poland. “How naive was I,” she recollects. “I didn’t see him or home again for five months.”

The film company put the artists up in hostels for the first three weeks of training. “But after that,” notes Wimperis, “we were on our own, which was exciting.”

Although the three-week training turned into a five-month contract to work on Loving Vincent, Wimperis says she would do it all over again. “I would work on a film about another artist. [However], I would have to like their work,” she explains. “The animation process hasn’t influenced my work at all. But I think van Gogh might have.”

She continues, “What [painting like van Gogh] has done is convince me of the benefits for all artists, whatever stage you are at, beginner or professional, of studying and copying work of artists [who] you are drawn to. It’s a fantastic way to learn and to practice your skills.” 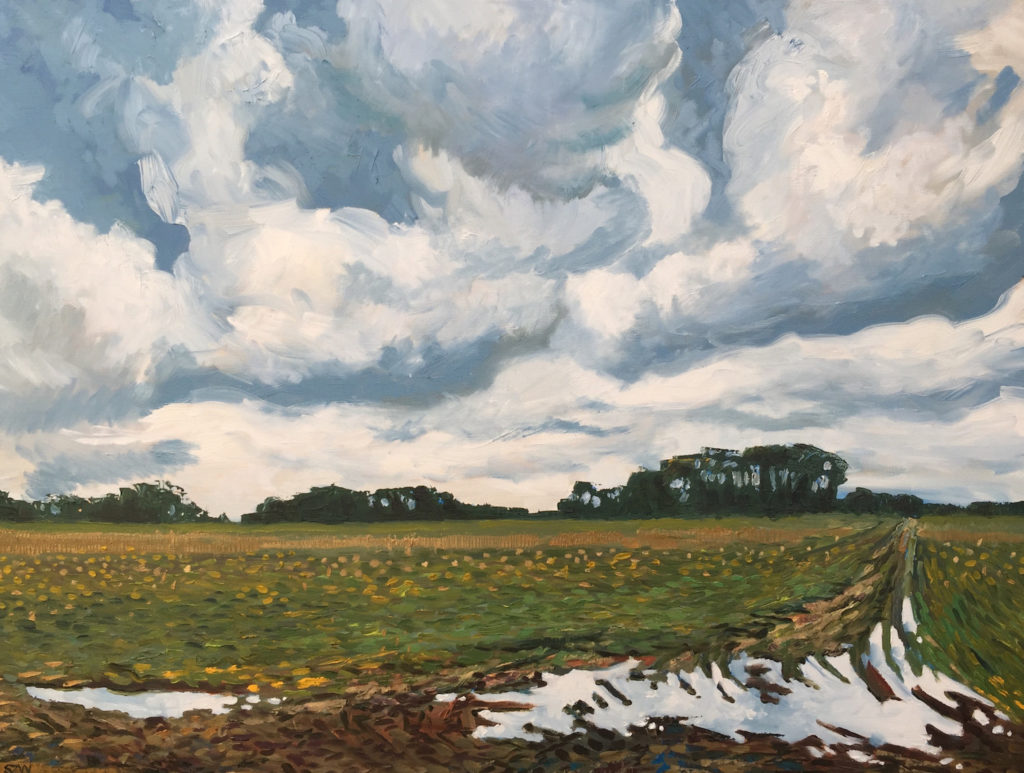 If appreciators of van Gogh and the film alike want to keep one as a cherished keepsake, approximately 200 of the final oil paintings are up for sale on the movie’s website. One of Wimperis’ paintings featured in Loving Vincent has already sold to a collector of her work. “He rang me and told me,” she says. “I will get to see it when he has had it framed. I am going to sign the back [of the painting] for him.”

And, if you are excited to try your hand at painting like Vincent van Gogh, seize the opportunity with Impressionist Painting with George Gallo Deluxe Collection. You’ll create art that reflects the style and substance of the greatest painters of all time.

I received a degree in sculpture, during which I wanted to use the time to learn skills like casting and welding. I also wanted to keep my painting a bit secret. That was a long time ago.

Since then I have traveled to paint, taught in Norway for six years, and completed a fair bit of illustration work. I used to be an illustrator for the show “Jackanory” on the BBC. 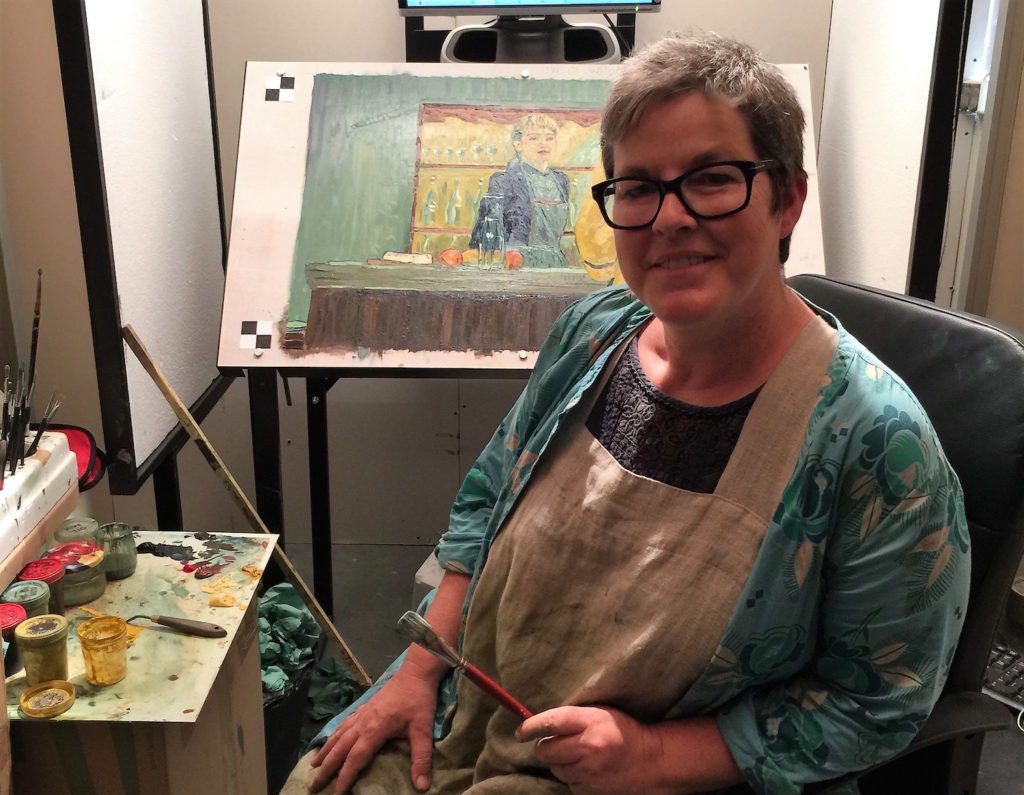 Sarah Wimperis in her PAWS station

I have been very lucky to have a supportive partner who took on a lot of the childcare and household stuff when our five kids were small. They are all grown and have kids of their own now, but he still does a lot of the day-to-day tasks, which gives me time to paint.

I run workshops as well, using van Gogh as inspiration. I still sculpt a bit and recently have gotten interested in making small rooms based on famous paintings. Of course, it was van Gogh’s bedroom at Arles that set that interest off! 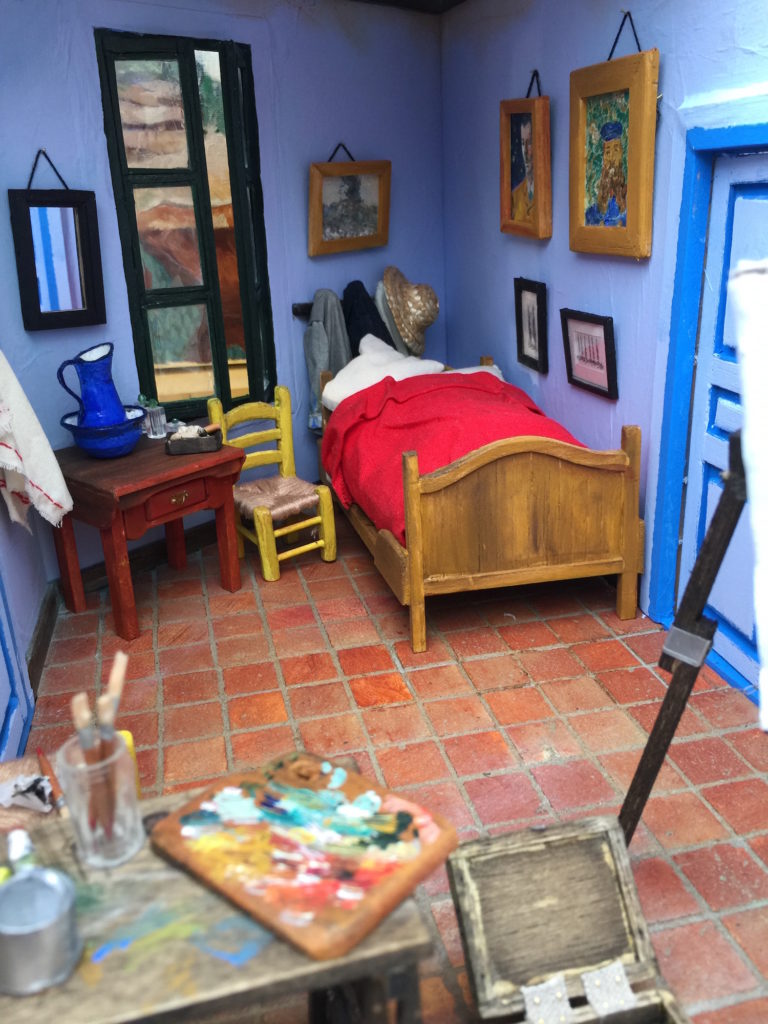 You can learn more about Wimperis and her art by visiting her website, www.sarahwimperis.co.uk.