50 plus very interested Lake Worthians gathered at the Annex to attend the Lake Worth Historical Society presentation by Marion Cone, who did most of the research presented.

Marion took everyone down memory lane as she recounted how this town came into being via a lottery system set up by The Palm Beach Farm Co.  aggressive advertisement for $20 down $10 a month you could own a 25 x 135 lot in town, if you purchased farmland plots just west of Lake Worth.  “Live like the millionaires on Palm Beach”.  plus you could earn a living via being a tuck farmer or tending an orange grove.

. Plaques were handed out to the owners of the 1912 homes  that still had identifiable original  architectural details.  Out of 30 possible candidates 5 were given that honor.

The earliest settlers had been documented  in a very interesting book by Ted Brownstein ” Pioneers of Jewell” This presentation however, starts with the 1912 Census as recorded in the Lake Worth Herald.

Those awarded last night still have parts of the original structure in their homes.  Overheard one of the awardees house still had about 12 florors on top of the foundation.  One of the oldest houses at 109 s Federal was a rooming house. (todays terminology perhaps an air B and B  lol) 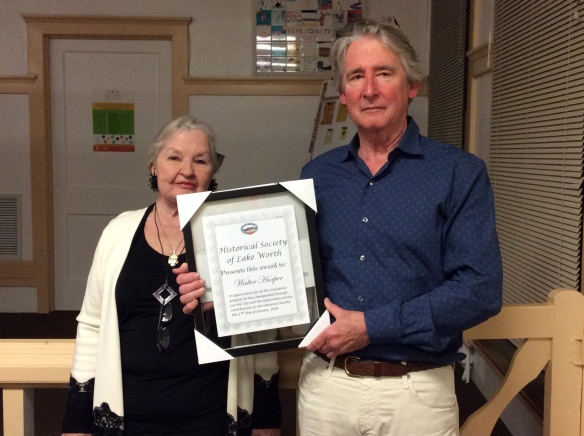 Also recognized for doing so much was Walter Harper who has tirelessly been working along Marion Cone.  They penned a book together on LW Cottages.  and many of the improvements as signage and presentation of artifacts was due to his diligence.

This on the heals as a developer bullozess Frank Lloyd Wright building  during the night, as preservationists rush to save it.  Building was on the National Register of Historic Homes.